Engage Your Creativity: Copyright and IP for Young Professionals 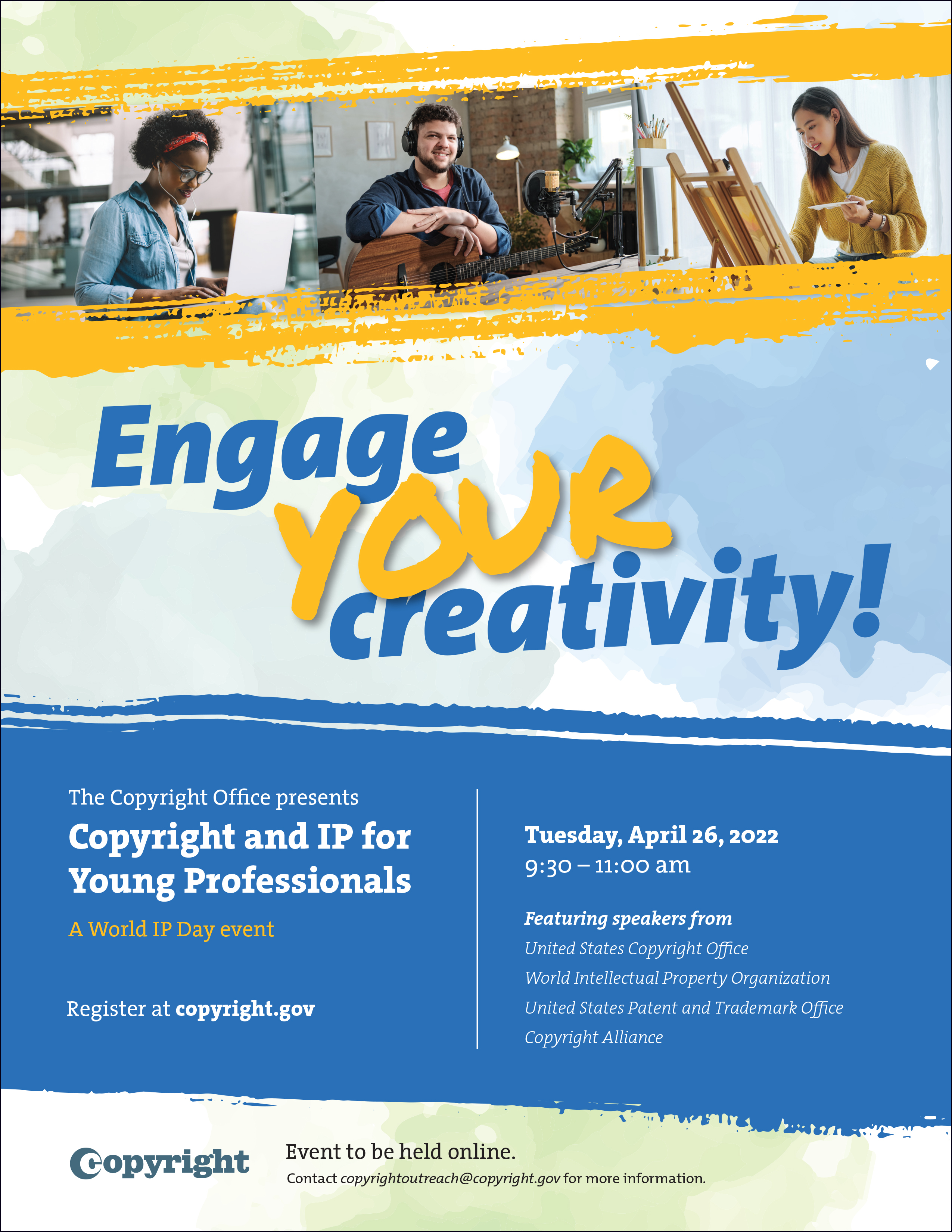 The U.S. Copyright Office invites you to attend the upcoming Copyright Office Presents celebration of the World Intellectual Property (IP) Day. Please join us on April 26 at 9:30 a.m. eastern time on Zoom for Engage Your Creativity: Copyright and IP for Young Professionals as we explore the intellectual property rights these young creators enjoy. Closed captioning provided.


The Register of Copyrights, Shira Perlmutter, will open the event with introductory remarks. Altaye Tedla Desta, head of World Intellectual Property Organization (WIPO) eLearning Program, will speak on behalf of WIPO. Throughout the event, we will hear presentations from George Thuronyi, the interim head of the Public Information and Education Office; Branden Ritchie, senior level attorney from the U.S. Patent and Trademark Office (USPTO); and Jaylen Johnson, attorney-advisor from the Public Information and Education Office. The program will end with Christopher Kenneally of the Copyright Alliance, who will interview young artists to discuss their experiences with IP, their career stories, and links to copyright relevance.


In addition, Register Perlmutter will be taking part in a virtual fireside chat at the USPTO World Intellectual Property Day 2022 event at 1:00 p.m. eastern time. She will discuss how to promote IP adoption among young innovators.


World Intellectual Property Day, observed on April 26 since 2000, marks the date in 1970 when the WIPO Convention came into force. The anniversary of this occasion is observed as a way of promoting and increasing general understanding of intellectual property. This program is part of the Copyright Office Presents lecture series and is free and open to the public. 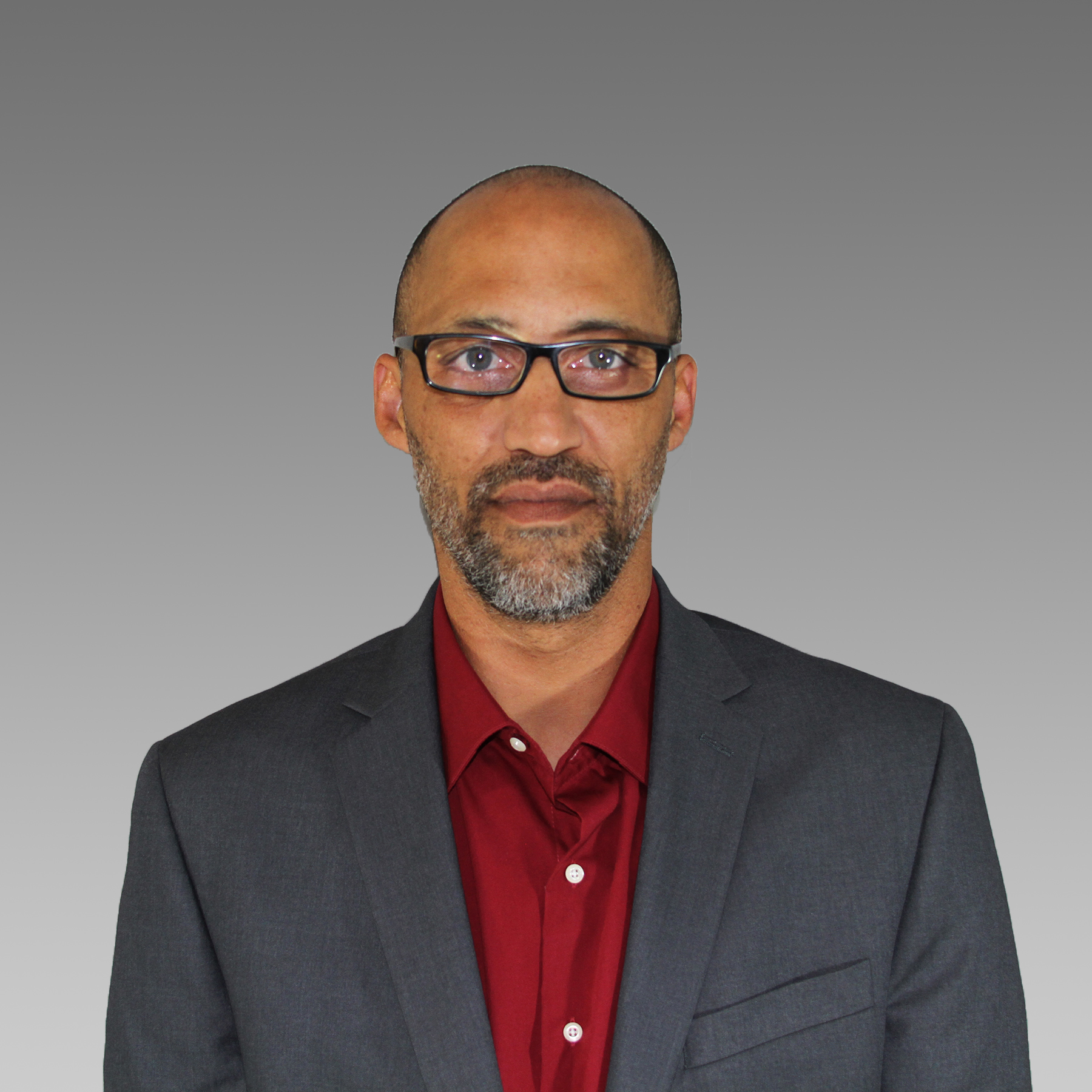 
Hakim has also earned a reputation as a staunch advocate for artists rights. He has served as an executive for Warner Music Group, Agile Software, and Ariba Technologies. Througout his career Hakim has helped develop and launch or establish dozens of successful assets including; Television Shows, Music Careers across several genres, and built and sold multiple businesses spanning across the Music, Entertainment, Cannabis, Software, and Technology industries. 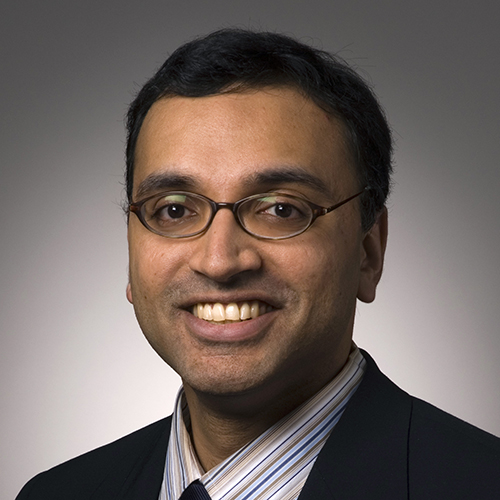 Sunil Iyengar directs the Office of Research & Analysis at the National Endowment for the Arts. Under his leadership, the office has produced dozens of research reports, hosted periodic research events and webinars, led strategic plan development for the agency, and established research and data partnerships with the U.S Census Bureau and the Bureau of Economic Analysis. His office also conducts program evaluations and performance measurement for the Arts Endowment. Working with his team, Iyengar has created and pursued a long-term research agenda (based partly on an arts “system map” his office helped to design), founded a national data repository for the arts, and launched two awards programs for arts researchers, including the NEA Research Labs initiative. He chairs a federal Interagency Task Force on the Arts and Human Development. For nearly a decade, he has contributed a monthly research post (titled “Taking Note”) to the agency’s official blog.


Iyengar and his team have collaborated with organizations such as the Brookings Institution, the National Academy of Sciences, the Robert Wood Johnson Foundation, the Association of American Medical Colleges, and the National Institutes of Health (NIH) to explore the arts in relation to such topics as health and well-being, economic development, and STEM and medicine. His office provides research consultative support to Creative Forces: NEA Military Healing Arts Network. Most recently, he has led a research funding partnership with NIH as part of Sound Health, an initiative of the Kennedy Center and NIH in association with the Arts Endowment.


Prior to joining the agency as research director, Iyengar worked as a reporter, managing editor, and senior editor for a host of news publications covering the biomedical research, medical device, and pharmaceutical industries. He writes poems, book reviews, and literary essays. Iyengar has a BA in English from the University of Michigan in Ann Arbor. 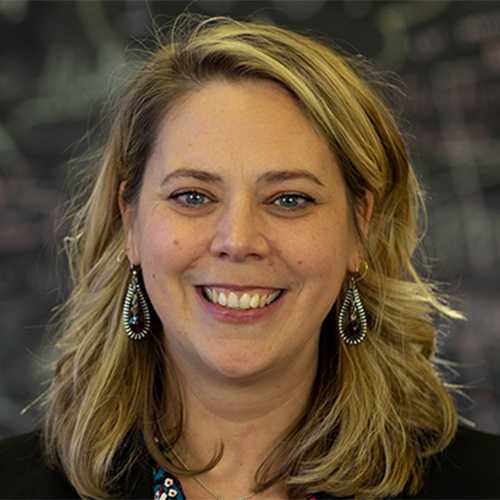 Laura Zabel is the Executive Director of Springboard for the Arts, an economic and community development agency run by and for artists. Springboard provides programs that help artists make a living and a life, and programs that help communities connect to the creative power of artists. Springboard is a nationally recognized leader in artist-led community development, creative placemaking and cross-sector collaboration. Springboard’s work has been featured by the New York Times, PBS, Wall Street Journal, Stanford Social Innovation Review and The Guardian and directly impacts over 25,000 artists each year in their home state of Minnesota. Through their free toolkits, training and resources Springboard’s programs have been replicated in over 100 communities across the U.S. and internationally.


Zabel has been honored with numerous awards, including the YBCA 100, Gard Foundation Award of Excellence, Common Future Local Economy Fellowship and the Bush Foundation Leadership Fellowship. Zabel is on the board of directors of the Metropolitan Consortium of Community Developers and serves as an advisor to Dakota Resources, The Laundromat Project, Local Initiatives Support Corporation and the University of Kansas Department of Theater and Dance.