Dramatists Guild of America on the Occasion of Its 100th Anniversary 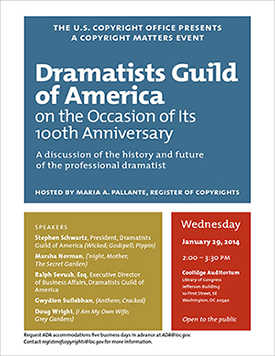 The U.S. Copyright Office presented a Copyright Matters program on Wednesday, January 29, 2014, at 2:00 p.m. Entitled Dramatists Guild of America on the Occasion of Its 100th Anniversary, the program was held in the historic Coolidge Auditorium in the Jefferson Building of the Library of Congress, 10 First Street, SE, Washington, DC. The event was free and open to the public.

Stephen Schwartz is a composer and lyricist. Currently President of the Dramatists Guild of America. Currently on Broadway: Wicked, Pippin. Other New York theatre credits include music and lyrics for Godspell and The Magic Show and book adaptation and four songs for Working (which he also directed.) He has written music and lyrics for other shows, which have received numerous regional theatre productions, including The Baker’s Wife, Children of Eden, and My Fairytale, as well as two musicals for children, Captain Louie and My Son, Pinocchio, and collaborated with Leonard Bernstein on lyrics for Bernstein’s Mass. In addition, Schwartz has had extensive experience writing for film, television, opera, and recordings. For the past sixteen years, he has served as artistic director of the ASCAP Musical Theatre Workshops in New York and Los Angeles. Awards include four Drama Desk Awards, three Academy Awards, and four Grammy Awards.

Ralph Sevush, Esq.,is an entertainment attorney (Cardozo Law School, 1991) and Executive Director of Business Affairs for the Dramatists Guild of America, where he advises over 7,000 playwrights, lyricists, and composers writing for the stage, and where he is a regular contributor to The Dramatist magazine. Early in his career, he worked for Sony Pictures, Reiss Media, New Line Cinema, and ALMI Cinema 5 Films in various aspects of motion picture marketing, distribution, and finance. Later, as the Director of Business Affairs for Fremont Associates, he worked on the Broadway productions of Big*The Musical, Bill Irwin & David Shiner’s Fool Moon, and Julia Sweeney’s God Said, `HA!’, and the off-Broadway and Los Angeles productions of Claudia Shear’s Blown Sideways Through Life. He also co-produced and general managed an Off-Off-Broadway revival of the Harvey Schmidt/Tom Jones musical Philemon. Currently, in addition to his work at the Guild, he is a member of the BMI/Lehman Engel Musical Theater Librettists’ Workshop. Also, his play Little One, Goodbye was last presented as part of the Immigrants’ Theatre Project's “American Dreams” staged reading series at the Lower East Side Tenement Museum.

Gwydion Suilebhan is a founding member of The Welders and D.C.’s representative to The Dramatists Guild, Suilebhan is the author of The Butcher, Reals, Abstract Nude, The Constellation, Let X, The Faithkiller, Cracked, Anthem, Evolution, Hot & Cold, The Great Dismal, and Buggy & Tyler. His work has been commissioned, produced, and developed by theaters in New York, Chicago, Los Angeles, D.C., Baltimore, and St. Louis, including Active Cultures, Centerstage, dog & pony DC, the Ensemble Studio Theatre, Forum Theatre, Gulfshore Playhouse, HotCity Theatre, the National New Play Network, Rorschach Theatre, Source Theater Festival, the Taffety Punk Theatre Company, Theater Alliance, and Theater J. He writes for stage, screen, print, and throughout the blogosphere, including HowlRound and 2amTheatre. Suilebhan earned his master’s degree in poetry from Johns Hopkins University. He speaks on theater and the arts around the country; his recent engagements include South by Southwest, the Dramatists Guild National Conference, TEDxWDC,TEDxMichiganAve, the Ethical Society, and several academic institutions. His publications include two of his plays, Abstract Nude and Cracked; Inner Harbor: Ten Poems; more than 75 articles on poetry, education, and cuisine; and the Foreword to The Complete Idiot’s Guide to Grammar and Style

Doug Wright was awarded the Pulitzer, the Tony, and the Drama Desk for his play I Am My Own Wife. In 2006, he received Tony and Drama Desk nominations for his book for the musical Grey Gardens. He also authored the book for the stage incarnation of Disney’s The Little Mermaid and the 2013 stage production of Hands On A Hardbody, for which he received a Drama Desk nomination. Earlier in his career, Wright won an Obie Award for Quills and subsequently adapted it for screen. The film was named Best Picture by the National Board of Review and nominated for three Academy Awards. His screenplay was nominated for a Golden Globe Award and received the Paul Selvin Award from the Writers Guild of America. Other film work includes rewrites on major releases at Sony Pictures, Twentieth Century Fox, and The Weinstein Company. For director Rob Marshall, Wright penned the television special Tony Bennett: An American Classic, which received seven Emmy Awards. Directing credits include his own play Unwrap Your Candy at the Vineyard Theater in New York; Strindberg’s Creditors at the La Jolla Playhouse, voted Best Production by the San Diego Theatre Critics Circle; and Kiki and Herb: Pardon Our Appearance in Washington DC, Philadelphia, and London. Acting credits include Little Manhattan, Two Lovers, and Law and Order. Wright serves on the boards of the New York Theater Workshop and the Dramatists Guild. He is a member of the Stage Directors and Choreographers Society and the Writers Guild of America. He lives in New York with his husband, singer/songwriter David Clement.